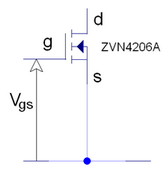 Fig 1 shows the symbol for an N-channel MOSFET. When Vgs is 0V there is very high resistance between drain and source – the transistor is off. When Vgs reaches about 2.5V the resistance between drain and source is very low – the transistor is on. It is the electric field produced by the positive charge on the gate that ‘opens’ the conducting channel.

Note: The insulation between gate and channel is easily punctured by electrostatic discharge. Always avoid handling the pins of a MOSFET and fit it as the last component in a circuit. To protect the MOSFET from electrostatic discharge a zener diode can be used to shunt the gate and source pins. To protect the zener diode from excessive current in normal circuit operation use a zener voltage that is a little higher than the power supply voltage. Unfortunately, zener diodes also have a leakage current which will shorten the timing period by a factor of at least 10 if used in the night light circuit. Typical leakage of a BZX55-C12 is less than 100nA but low leakage zener diodes (less than 10nA) are also available. 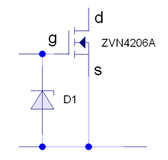