Moving charges apart to create a potential difference requires energy because each negative electron is being pulled away from a positive nucleus against the force of attraction. This is similar to the way that energy is needed to lift an object, like a bottle of water, up in the air against the attractive force of gravity (which you can think of as a mass separation).

Separating a coulomb of charge to create a
voltage of 1V requires 1J (Joule) of energy.
This is quite a small amount of energy;
electrical energy use in homes is often
measured in ‘Kilowatt-hours’ (kWh)
where 1 kWh = 3.6 million Joules.

We know that energy can’t be destroyed – so what happens to the energy used in creating the charge separation? The answer is that it is transformed into electrical potential energy. Again this is very much like the way that the energy used to lift the water upwards against the pull of gravity is transformed into gravitational potential energy; if the water is poured out the potential energy is transformed into kinetic energy (energy of movement) as the water accelerates downwards. This kinetic energy can, in turn, be harnessed to do useful work, for example in a hydroelectric power station. The amount of energy released depends on the difference in height between the start and the end of the drop and the amount of water. In a similar way the potential energy of separated electrons can be released to do useful work. If the electrons are allowed to return to the positively charged atoms from which they were separated, their potential energy will be released and can be harnessed. To do this requires an electric circuit made of a conductor that allows the electrons to return. The details of this will be discussed in the next article in this series on current. To summarise, separated charges create an electric potential difference (a voltage). The size of this potential difference is measured in volts. When measuring the size of an electric potential difference you are measuring the difference in electric potential between two places. Separating charges requires energy. When separated charges are reunited, the energy is released and can be harnessed for useful work.

So, it seems that all we need to do to create useable electrical energy is to create a voltage by separating charges. There is a number of ways that charges can be separated; five of these are outlined here: 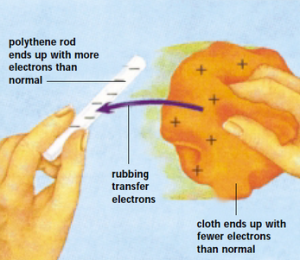 When different types of materials rub against each other, electrons can be moved from one material to another. This causes a charge separation, but one that isn’t generally useful; the amounts of separated charge are generally too small to do anything practical with. However engineers have recently been investigating whether the rubbing of your clothes as you walk could be used to generate enough useable electricity to charge a mobile phone.