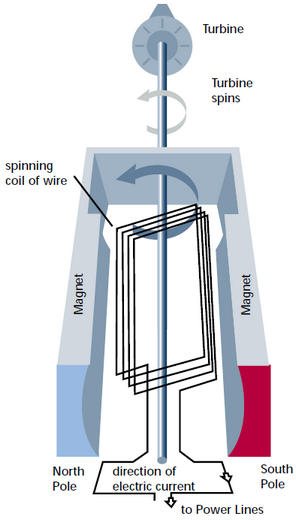 This is currently the method used to generate the greatest amount of electricity in the world. When an electron is moved through a magnetic field a force is created that pushes the electron. An electron in a conducting wire is pushed to one end of the wire, so creating a voltage along the wire. If you can arrange for the wire to keep moving in the magnetic field then you will have a continuous force on the electrons; as you release the potential energy by allowing electrons to flow back through a circuit and do useful work, more electrons will take their place and you will have a permanent potential difference. An electrical generator is, put simply, a device that keeps wires moving through a magnetic field to produce a permanent and useable potential difference. Clearly energy has to be used to keep the wire moving through the magnetic field and this can come from a wide range of sources, these include:

•    Burning fossil fuels. Despite fears about global warming, this remains the main source of energy for electricity generation. Some of the energy from burning petrol or diesel in a car is used to run the car electrics.

•    Nuclear power. Argued by some to be the solution to fears about global warming and rejected by others as simply too dangerous.

•    Renewable sources. Wind, waves, rivers, solar heating and biomass (growing plants to burn) all ultimately come from the energy of the sun. Tidal energy is created by the pull of the moon on the earth. Geothermal energyis heat tapped from the earth’s crust.

•    Human power. For example a dynamo on a bike or the winding of a spring in a wind up radio. 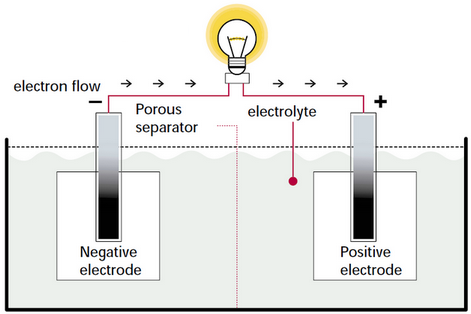 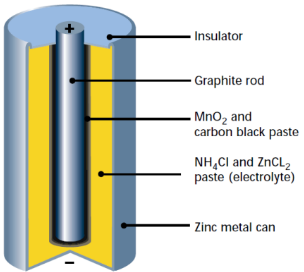 Fig 6 How a cell contains a chemical reaction

Fuel cells use a rather different chemical technology to generate charge separation. In a basic fuel cell hydrogen and oxygen are combined to create water; this is a chemical reaction that releases energy and the cell is designed to use this energy to separate charges creating a voltage of about 0.7V. The main difference between a fuel cell and a battery is that, when the hydrogen in a fuel cell runs out the cell can be refuelled by adding more hydrogen (the oxygen used comes from the air).

It is worth noting that the chemicals used in both chemical and fuel cells have to be made in some way – usually using electricity generated by one of the other methods noted here. However, both batteries and fuel cells are useful for situations

where electrical power is wanted away from mains electricity; in portable consumer goods and for transport. Increasingly, you will find fuel cells replacing batteries in products such as mobile phones.